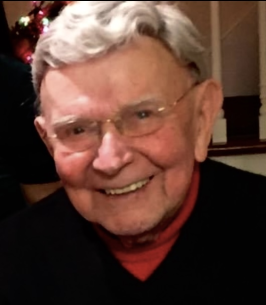 Verne Glenn Jeffers, age 96 of Painted Post and formerly of Mansfield, PA passed away on December 17,2021 at home surrounded by his family.

Verne was born on December 31, 1924 in DeKalb Junction, NY to Glenn and Bernice (Conant) Jeffers.

He was a graduate of DeKalb Junction High School, earned a BS degree in education from Potsdam State Teachers College in 1950, and an MS degree in education from SUNY Potsdam in 1952. Verne started his teaching career in Oswego, NY where he met the love of his life, Carol. He then became certified as a Principal from St. Lawrence University and was Principal of elementary schools in the Catskill School District. At that time, he was selected to be the head of the Capital Area School District Association which led to him enrolling in the doctorate program at SUNY Albany. He earned his EdD in 1966 while working in the Capital District School System. After a brief time at Fredonia State College he began his long career at Mansfield State College where he was on staff in the Elementary Education Department from 1968 until his retirement in 1992. He was well known for chatting with students in his office while having a cigar. In 1977 he was recognized in America’s Names and Faces for several of his published works in education.

He spent many years of his retired life enjoying happy times at Keuka Lake and Myrtle Beach as well as traveling on several cruises with Carol. He had many wonderful memories of his years living in Mansfield with his family and friends. He especially enjoyed golfing at Corey Creek Golf Club and bowling at Maple Lanes. He was an avid fan of UNC Basketball and loved watching college ball. In 2006 he and Carol moved to Painted Post and he enjoyed many years there also. He will be remembered for his kind nature, sense of humor and singing Happy Birthday to his family members. He was the ultimate family man who loved to spend time with his wife, children and grandchildren.

He is survived by his wife of 65 years Carol (Masteller) Jeffers of Painted Post, his daughter JoAnn (Jack Rovinski) of North Myrtle Beach, SC, his son James (Kathy) Jeffers of Chevy Chase, MD, and his daughter Judy (Thomas) Landry of Painted Post. He is also survived by his grandchildren Eric (Nicole) Jeffers, Matthew Jeffers and Gina Landry, his great granddaughter Madison Jeffers and several nieces and nephews.

He is predeceased by his parents, his sister Laura Shattuck and his brother George Jeffers, his nephew John Jeffers, his great nephew Christopher Barstow, and several brothers and sisters-in-law.

There will be a celebration of life for family and friends at a later date. Memorial contributions can be made to the Coopers Plains Fire Department, Coopers Plains, NY 14827.

We would like to thank all of our family and friends for their prayers and support during this difficult time. Thank you to all of the caregivers and a special thank you to Misty and Tim for their special care and loyalty.