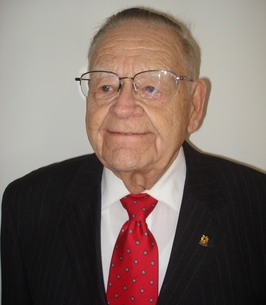 Frank J. Hamm, 92 of Corning, NY passed away Sunday May 29, 2022 at the Corning Hospital.
Born in Warren, PA he was the son of the late Frank and Mary (Gertsch) Hamm. He graduated from Northside High School, class of 1948 and Alfred University, class of 1952. Frank married the late Phyllis Lee Andrews on July 20, 1952 in Savannah, NY.
Frank was a Korean War Veteran. During his tour with the US Army, he managed a military PX. After returning, Frank worked with his father at the Tasty Bakery, eventually owning it. In a second career, Frank sold real estate and was an insurance assessor. He served on the Corning Board of Assessment Review for many years.

Ready to go anyplace, he and Phyllis traveled to Europe, Hawaii, Alaska, Central and South America. Frank enjoyed swimming and boating at the family cottage on Keuka Lake. He was an active member of the Corning First Presbyterian Church, serving as Elder, Deacon and Trustee and spearheaded many projects. Frank was a Scottish Rite (Mason) for 70 years and received the Meritorious Service Award and was coroneted as 33rd degree.
Those who knew Frank through the years, and there were many, will remember his love and dedication to Corning and its citizens. He was a driving force behind many activities in the community and was always there to lead or lend a helping hand whatever the cause. His devotion to his family, his church, masonry and to Corning will be greatly missed.
Surviving are his three daughters: Carol (Michael) Flook of Lindley; Marilyn (Jeffrey) Hagy of Corning and Linda (Andrew) Ashworth of Pittsford, NY; grandchildren: Diane Rudy, Alexa Ashworth, Alyssa Eisenberg and Madeline Ashworth; great grandchildren: Leah Rudy, Erica Rudy and Ava Eisenberg.
Friends are invited to attend a memorial service at the Corning First Presbyterian Church on Saturday, June 11, 2022 at 1:00 pm. Memorials may be made to the First Presbyterian Church, 1 E. First Street, Corning, NY 14830 or to a charity of the donor’s choice.