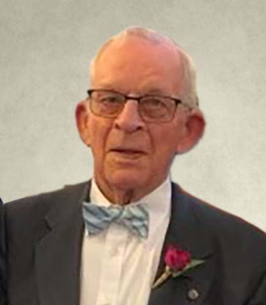 Elwin E. Marshall, age 91, of Painted Post, New York passed away on Monday, December 13, 2021 at home. He was born on April 14,1930 in Williamsport, Pennsylvania to Milford E. and Sara C. (Knight) Marshall. He was a graduate of Muncy High School Class of 1948, participating in wrestling, football, and serving as a class officer. Elwin enlisted in the Navy in 1948 and left active duty in1952. He was active in the Naval Reserves for many years and retired as a Senior Chief Petty Officer class E8.

On February 14, 1953, Elwin married Betty Louise Cappelli in Williamsport, PA. They moved to Painted Post when Elwin began working for Corning Glass Works. While employed as an engineer at CGW, he worked on many projects including TV picture tubes, Gorilla Glass, and Corelle Ware, holding two US Patents. Elwin recently received his 65 year service pin from Corning.

Elwin and Betty went on to have 6 children. While they were young, he was involved in the PTA, and Little League Baseball. He was an avid bowler for many years serving in leadership positions in multiple leagues. He was a avid fan of Notre Dame Fighting Irish, Boston Red Sox and any sports team his grandchildren were playing on. After his retirement he served as chauffeur to Betty and her girlfriends to various social engagements. After her death, after almost 46 years of marriage, Elwin filled his time focusing on his family, and served as the Patriarch of the family.

In addition to his parents, Elwin was predeceased by his wife, Betty, granddaughter, Hannah, and siblings, Ted, Ardella, Maxine, Grace, and Don.

In lieu of flowers, donations in Elwin’s name may be directed to Corning Meal on Wheels, Inc, 144 Cedar Street, Corning, NY 14830.

Kind words or fond memories of Elwin can be offered to his family at www.PhillipsFuneralHome.com