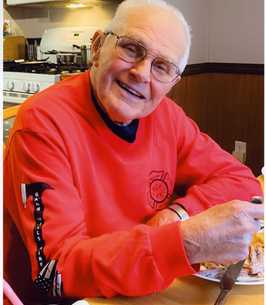 Cloyd was very devoted to his family and friends, always having a kind word or joke for anyone, he loved meeting people. As a child he grew up on several Pennsylvania farms. He was a proud Veteran of the U.S. Army and during the Korean War, was assigned with the 155th Self-Propelled Gun Battery of the 92d Division, known as the "Red Devil" Division. He met Nancy at a USO dance after returning home. Cloyd was a member of the Breesport Masonic Lodge serving as Past Master in 1980. In 1991, he joined the Gang Mills Fire Department where he served as Fire Police. After retiring in 1996 from Dresser Rand in Painted Post, he served as a greeter at Wal Mart in Painted Post from 2001-2010, where he became known as “The Button Man". He enjoyed traveling, fishing, riding his motorcycle, woodworking, and home building. Cloyd was also known for his sense of humor, especially his jokes.

The family would like to thank Dr. Michael Cilip for his care of Cloyd throughout the years.

Family and friends are invited to Phillips Funeral Home, 17 W. Pulteney Street, Corning, on Friday, June 10, 2022 from 4:00 to 7:00 pm, beginning with a Masonic Service. The Fire Department Honor Guard will be present. At 6:30 a celebration of Cloyd’s life will begin, followed by Military Honors. Burial will take place on Saturday at 11:00 am with a short service given by nephew Marvin Young at Mazeppa Union Cemetery near Lewisburg, PA.