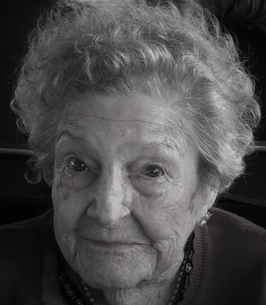 Born on October 2, 1925 in Brooklyn, NY to Albert and Jane Foster, she was raised in North Bellmore, NY. She had a colorful childhood partly due to riding horses and learning trick riding from her paternal grandfather, Harry Foster. This grandfather spent many years out West working with various Wild West shows and breaking horses for the US Calvary.

She entered the working world where she worked her way up to Head Copy Girl for the New York Herald Tribute in Manhattan. It was at the newspaper where she met her future husband, Robert Gordon, who was Head Copy Boy. They married in 1944 and started a family a year later. Berta and Bob created their own business (on a wing and a prayer) while sitting at a card table in Brooklyn, NY in the early 50’s. This business was called Atlantic Emblem which sold various school and college novelties such as autograph albums, diploma cases, etc. In 1968, they opened their own manufacturing branch for Atlantic Emblem. This new branch was called Foster-Gordon Manufacturing. Both of these businesses are still family operated. At the age of 45, Berta began her journey to fulfill a lifelong dream of attending college. After 5 years she earned her Associates Degree from Suffolk Community College, Selden, NY.

Berta was predeceased by her husband, Robert and her sister, Gloria Faulkner. She is survived by her younger sister Pat Tierney of Warrington, PA., her four loving sons: Steven (Diane) of Bayport, NY; Glenn (Michele) of Corning, NY; Peter (June) of Corning, NY; and Jonathan (Lauren) of Mt. Sinai, NY. She also had 8 grandchildren and 10 great-grandchildren.

Berta had numerous and varied interests throughout her life which added to her curiosity of the world. She was a truly voracious reader, had a warm spot in her heart for supporting Disabled American Veterans, and supported Native American communities and schools throughout the west. Family will hold a private celebration of Berta’s life in the Spring of 2022 on Long Island. In remembrance of Berta’s life, the family asks that any charitable donations be made to these charities: your local public library, Disabled American Veterans Charitable Service Trust, Native American Heritage Association or PBS (Public Broadcasting Service).

Phillips Funeral Home, 17 W. Pulteney St., Corning has been entrusted with her arrangements.